Mayor of Kharkiv: ‘We are already planning for a better future’

The World Urban Forum’s programme has been adjusted to address the conflict in Ukraine and broader issues raised about recovery and reconstruction after conflicts and natural disasters.

Even as bombs continued to fall on Kharkiv, the mayor of Ukraine’s second city said that preparations were underway to “rebuild a new, better Kharkiv” after the current conflict is over.

Igor Terekhov said talks had begun with the United Nations on plans for post-war reconstruction that would have a “new public transport network with electric buses, industrial parks, a dynamic IT sector and energy efficient housing”.

Mr Terekhov was speaking today via video link to the World Urban Forum in Katowice, Poland, at a Special Session on Rebuilding Communities and Neighbourhoods after War or Natural Disaster.

The biannual conference is convened by UN-Habitat and co-organized with the Polish government and Katowice’s municipal authorities.

“Kharkiv is still alive,” said Mr Terekhov. Reconstructing a greener, more accessible city was “necessary for us, Europe and the entire planet”, he added. Ukraine was last week given candidate status to join the European Union, which “would undoubtedly be a motivator for us to transform our country”.

The World Urban Forum’s programme has been adjusted to address the conflict in Ukraine and broader issues raised about recovery and reconstruction. Poland, the host country, has received an estimated four million people from Ukraine, with approximately one million crossing back to their home country as parts have become safer, according to UNHCR data.

The forum also heard from Sergii Mazur, Mayor of Balta, a town near Odessa in the south. He appealed to mayors and city leaders in EU and Great Britain to partner with counterparts in Ukraine to provide badly needed assistance for the reconstruction of towns and cities. 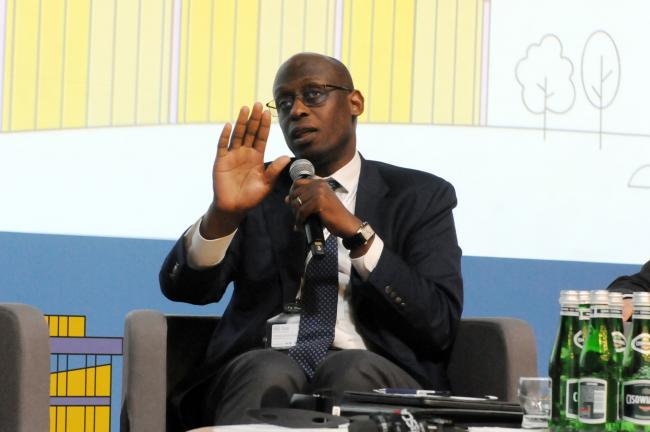 “Contact between mayors from one country to another is very rapid and faster than contacts at central government level,” he said at a press conference that followed an Extraordinary Dialogue on Urban Crisis Response and Recovery.

“We need to rebuild schools and our hospitals. We need medical equipment. We need to reconstruct our infrastructure, we need vehicles – new fleets of vans and light trucks for utility services, to reconstruct the power grid, to start delivering basic services in de-occupied territories and also in occupied zones.”

Maimunah Mohd Sharif, Executive Director of UN-Habitat, said that reconstruction efforts needed to move “beyond just talking about damage assessment, but focus on the damage done to communities, the damage done to people and living environment”.

Filiep Decorte, Emergency Response Director at UN-Habitat, said: “Mayors are first responders. They are very well placed to work with local communities and the private sector. They know that reconstruction is not a dream for the future but should start now.”

Raouf Mazou, Assistant High Commissioner for Operations at UNHCR, said that around the world displaced people were increasingly concentrated in urban areas, raising a new set of challenges for local authorities, particularly regarding employment and social services.

Gilles Carbonnier, Vice-President of the International Committee of the Red Cross, said that more needed to be done collectively to rebuild essential services not only after urban warfare subsided but during conflicts.

Katowice was chosen as the location for this eleventh World Urban Forum in recognition of its transition from a heavily polluted city in Poland’s Soviet-era industrial heartland to a centre of the culture and technology. That transformation was assisted by UN-Habitat in the mid-1990s.

WUF11: an “extraordinary moment” for the world’s cities

President of ECOSOC: ‘The time for New Urban Agenda is now’